Ken spent his early years in Japan and Singapore where his father was stationed in the army. He then returned to Colchester at the age of five. He left school at the age of fifteen and did various manual jobs including: upholsterer, bricklayer, carpenter and joiner, factory worker, lorry driver, coal man, fireman, farm worker and working with an Irish road gang, digging out trenches at Essex University. At the age of twenty, Ken (searching for some inner meaning and direction) joined a Franciscan Friary. He stayed for two years.The religious order sent him toYeovil College, where he studied for ‘0’ and ‘A’ level exams, one of which was ‘A’ level Art. He mainly taught himself as he was well able to handle any tool because of his experience as a carpenter and joiner. 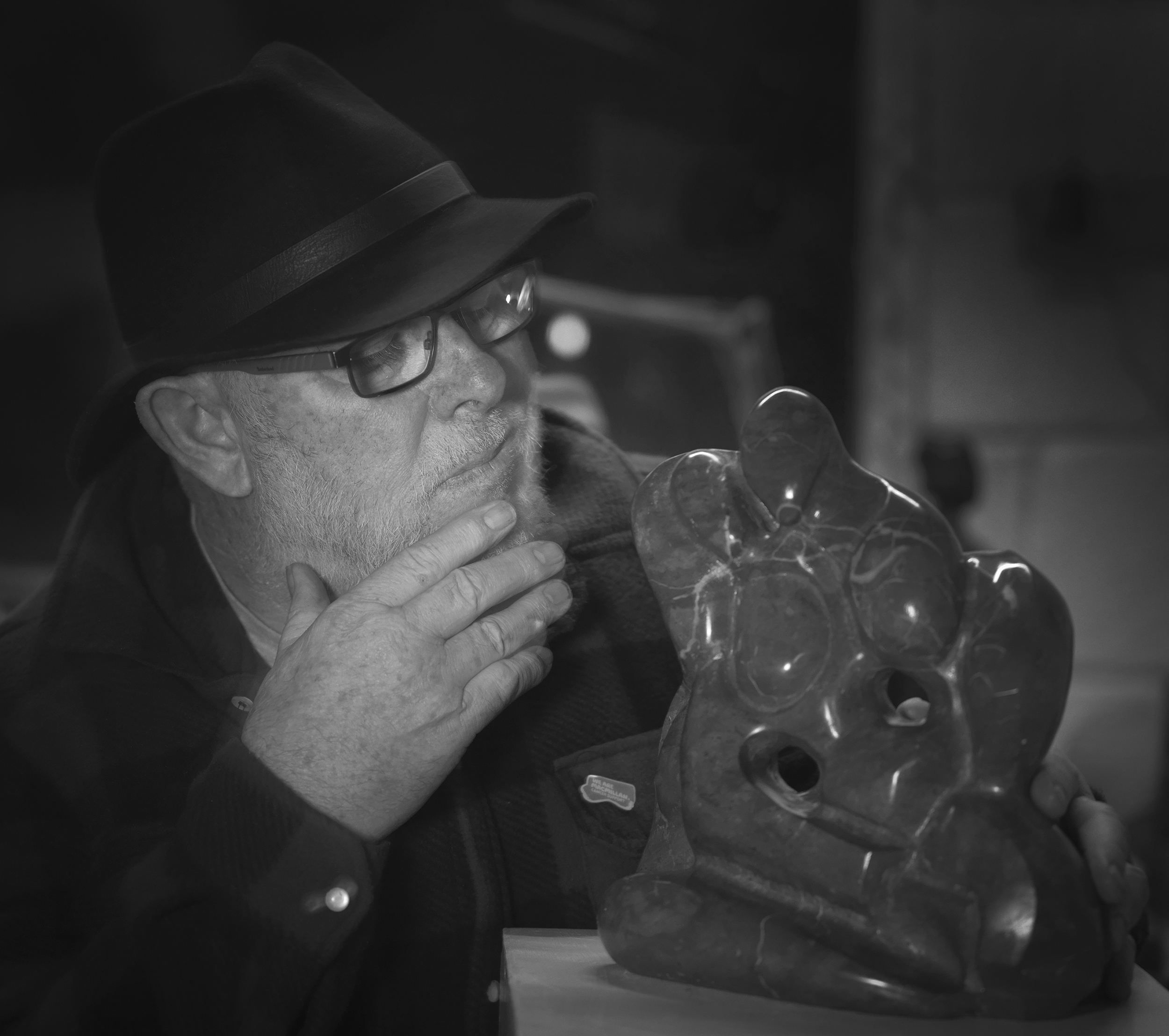 The compulsion to speak in stone came to me in my early twenties and has various roots. I was born in Manchester in 1944 and at the age of seventeen took up an apprenticeship as a carpenter/joiner, during the course of which I learnt respect for tools and natural materials.At the age of twenty, unsure of myself and searching for a sense of inner direction. I went to live in a Friary. I stayed for two years, living and mixing with the brothers. Whilst contemplating whether or not to join the order, I attended a local technical college, where I decided to study sculpture. Fortunately for me, the Sculpture Tutor, after a very short time, was happy to leave me to my own devices. I must have shown some promise, because in due course my tutor suggested I contact Henry Moore. I duly wrote enclosing photographs of some of my work, in vain hope he would accept me as an apprentice.He kindly replied, was very complimentary about my work and recommended I attend Art School and that if I wanted to, I could contact him after my studies. I next approached the Slade School of Art (suggested by Henry Moore) and presented examples of my work, accompanied by a letter from Henry Moore, to the then Professor of Sculpture, Reg Butler. He offered me a place at the school, but I decided not to take up the offer, as I had not attended a foundation or degree course. I next attended a one-year foundation course at Walthamstow College of Art and began to develop my own identity as a sculptor, in the process exhibiting at the Royal Academy and several provincial galleries. My next step on the learning curve was a course at Bristol School of Art where I learned my etching skills and experimented with various types of material, obtaining a Fine Arts Degree. On leaving Bristol. I sought the advice of Willie Soukop as to what direction I should pursue. He said I should go my own way, as it was clear to him, from seeing examples of my work, I had found my own signature in sculpture. I took Willie Soukop’s advice and have held to that advice for the past forty years. During that time I have continued to develop my own style and been fortunate enough to have enjoyed a number of successful exhibitions of my work, mainly in London and Spain. The material I most enjoy working with is Polyphant, blue -grey in colour and quarried in Devon. It is a soft stone, reasonably easy to carve, and with many hours of polishing, an excellent finish can be obtained. The areas that motivate me are my own family (married, having two sons), the closeness of it and the suffering of various minorities, ethnic, social, etc. I am also driven in the search to fulfil my spirituality in sculpture. I have worked on a number of commissions in Spain, in marble, a material I have become well acquainted with. During the years I have found my own way of expressing myself through the stone I carve. My life, one could say, is “written in stone”. The human form is always prominent in my work, although it is not always obvious. Examples of my work in Spain resulted in three exhibitions there. I still visit and work on commissions there, where I have recently completed a 2500 kg sculpture in marble for a private collector. The sculpture was then placed in the collectors grounds in Garmisch-Partenkirchen. The largest sculpture I have made to date, is 6000 kg in marble and is placed at Reads Hotel, Santa Maria, Mallorca. My next commission is a marble sculpture approximately 8000kg, height approximately 2.5m.
This site uses cookies: Find out more.