In April 1971. Ken Smith sent a number of photographs of his sculptures to Henry Moore. He received this encouraging personal reply (signed in the sculptor’s absence and dated 6th July 1971). There was a further exchange of letters over the next year with Moore’s secretary – but each time a date for a meeting was suggested and agreed, it had to be cancelled as ‘Mr Moore has had to go abroad’.Moore then suggested that Smith approach the Slade School of Art, which he did – presenting examples of his work, accompanied by a letter from Moore to the then Professor of Sculpture, Reg Butler. Following a visit to the Slade, he was offered a place by Butler but decided he would not take up this offer – as he had not yet undertaken a foundation course at art school. In the early 1970s, on a visit to Cape Town, Ken Smith and his wife Ros had visited Mary Moore, Henry Moore’s daughter, and her husband the art dealer, Ray Danowski. Then in the mid-1980s, Ken was invited round for tea to the house in Dorset where Mary and Ray were living. Mary Moore told him, ‘My dad liked your sculpture and I do too’, and Ray Danowski advised Ken to keep on making stone-carvings, and not to deviate into other materials – and that he felt good would come from persevering in that medium. 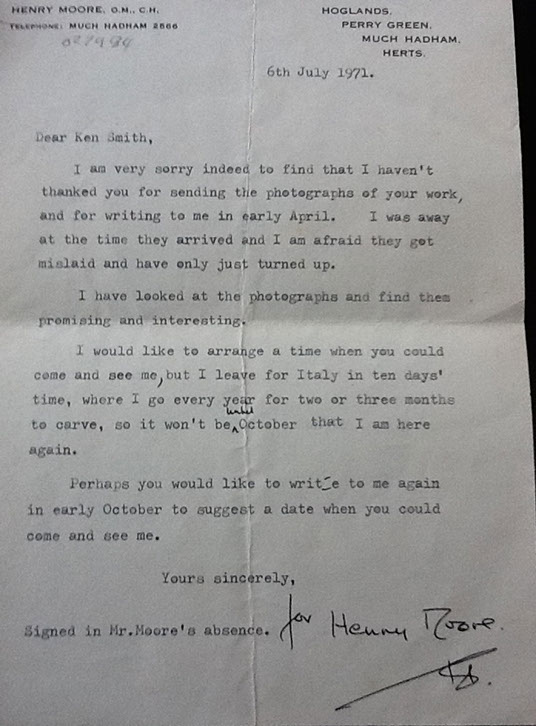